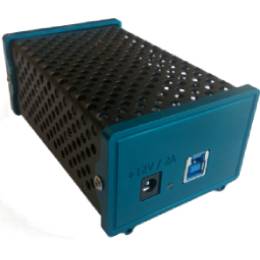 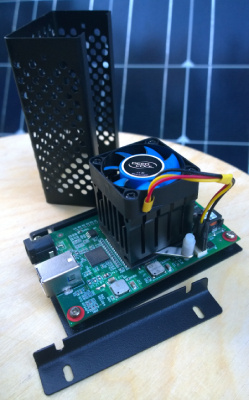 AtomMiner AM01 is the FPGA hardware miner designed to provide non-stop operation 24/7/365 in completely automatic mode. More over, we've decided to take one step further and provide the whole infrastructure for our miners and one-click solution for anybody interested in crypto, from beginners to experts. AM01 comes   packaged with lowest possible power consumption, one of the best hash-to-watt ratio available on the market and detailed statistics. Complete Plug-and-Play setup with no additional software or 3rd party tools or any programming required. Must have solution for every miner. Check out Guides section for more details and How to videos.

AtomMiner AM01 miner was designed with the idea in mind that anybody should be able to start mining with our FPGA miner no matter how much or little they know about FPGA. AM01 can be controlled by our cross-platform software, which has minimum hardware requirements. We provide ready-made software images you can run on your Raspberry Pi (or similar) or Virtual machine right out of the box and enjoy our plug and play setup. You will never have to restart a miner or control software in order to change mining algo! We've been thinking about you and our system will do everything for you automatically for your convenience.
By using our miners, you'll get access to all the existing and future infrastructure projects at no additional fee. We would never charge our miners with any dev fee or have any other hidden fees. We'd want to stay as clear as blockchain to our existing and future miners!

Find a Distributor Near You

* - Dimensions and weights are provided for reference only, as actual values may vary.

WARNING In order to avoid overheating, DO NOT COVER the miner.
WARNING  This product is not a toy. It should not be used by children or infirm persons without supervision.
NOTE  When assembling AM01 in farms, keep at least 25mm (1") of open space between miners to provide sufficient cooling.

Our miners have multiple advantages over traditional GPU or even ASIC miners: With under 20W of power consumption, you will get comparable hashing power to, as of right now, stock 1070Ti GPU which would draw approximately 150-175 Watts depending on the algo.
Another downside of using GPU miners is the price of the host computer, which is recommended to have at least i3 CPU, 4GB of RAM and at least 4-6 PCIe lanes to plug in mining cards. Most of the computer systems won't let you host more than 8-10 GPU card at once. AM01 miner is solving this problem in a graceful way: any computer board (ARMv7 or better) with internet access, USB and Linux OS can be used to control up to 64 miners at once, which will drop your total price of the PC hardware to almost 0. Our test shows that a single Raspberry Pi ($10-$20 USD) board is good enough to control miners and provide true scalability.
Another benefit of using AM01 miners is that our AM01 miners can be easily setup in the office or even in the living room because they are not producing heat and noise.

The Bottom Line
Typical entry level mining rig could cost you about $4900+USD (6x1070ti GPU, power supply, motherboard, CPU, RAM, risers, HDD; prices are based on the average price from Amazon at the time of writing), while you can get similar hashing power with AM01 at approximately $3700 USD.
By switching over to AM01 you will not only save on your electric bill, but can also cut the need of mid-grade control computer unit and expensive power supplies while keeping your mining space chill and quiet.

Current AM01 Hashrate Comparison
Hashrate is provided for the stock, not overclocked or modded GPU cards
Algo: Keccak/Keccak-C/SHA-3
Algo: Blakecoin

We're trying to keep the most interesting coins and rare gems on our pool at pool.atomminer.com. Our miner software is integrated and tuned to work with our pool by default and will provide all available features like profit switching and automatic algo selection to increase miner's earning.

Please visit the pool for coins list, price, profitability and other technical data.
Visit pool.atomminer.com Find a Distributor Near You

We're listening to our community and trying to adjust our roadmap based on majority of votes/requests we receive from our loyal miners. Please join our chat channels if you have great ideas or want to share you opinion on what should be done first.

** Have a suggestion or comment? Drop us a a line at atom@atomminer.com
*** Miners and assets security is one of our most important goals we're working on constantly, every day. We're willing to provide a one-click solution for everybody in the crypto world with the best top-of-the-line security behind it.

With AM01 miner you can turn your mining operations completely green. AM01 was designed to work with off-grid controllers including, but not limited to: With minimal power consumption (comparable to a single light bulb) and stackable design, you can connect as many or as little AM01 devices to maintain the best balance between hashrate and output capability of your new or existing renewable energy outlet.
We are leaving unlimited possibilities for all the Renewable Energy Integrators, designers and contractors to implement the best solution for Green Mining.
It is a well known fact, that most of the Renewable Energy systems are providing excess of electricity most of the time so system designers must think of a way to dump that extra energy generated by the system. AM01 will come in handy resolving this problem due to its low power consumption, scalability and portable nature: simple voltage regulator combined with flow/charge controller might help to use extra energy for mining. In case of Solar/Wind power you can convert unused energy to actual crypto coins instead of paying for dumping energy with the lifespan of your batteries etc.

Another great opportunity might be using AM01 in running vehicles. Modern vehicles don't have much use for energy produced by the alternator when the car battery is charged. We think it might be a superb opportunity for vehicle operators and owners to start mining crypto at no additional expenses.


Find a Distributor Near You
Are you a Renewable Energy Designer/Integrator/Contractor? Have any comments, ideas, suggestions or questions? Please feel free to join our chats or email us at atom@atomminer.com